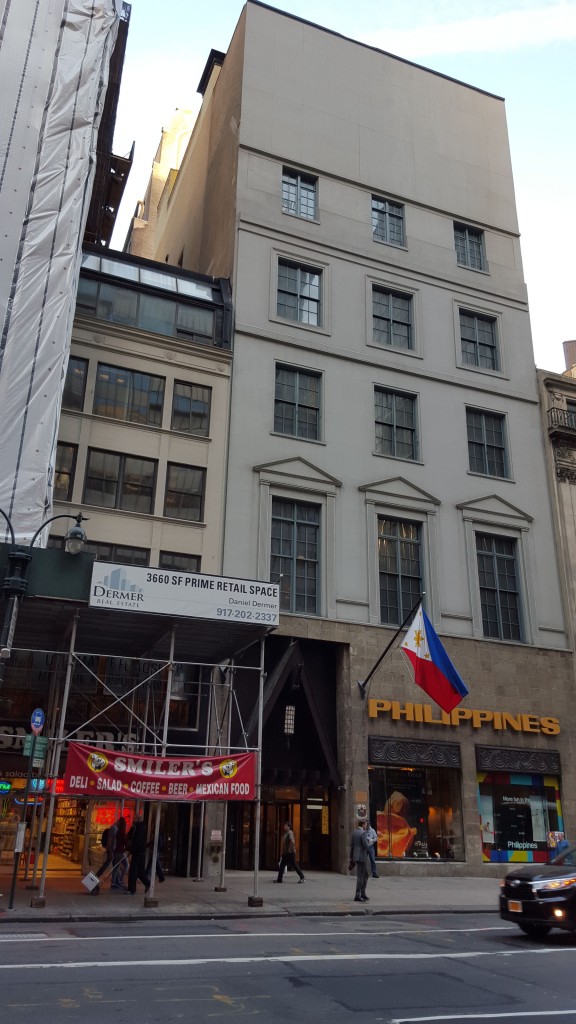 One of the most bizarre architectural remnants of Gilded Age New York, 556 Fifth Avenue was constructed in 1912 to designs by New York Public Library architects Carrere & Hastings for the prestigious Knoedler Gallery, one of city’s oldest such institutions.

Acquired by the Philippines government after Knoedler moved further uptown, in 1974 the façade of 556 Fifth Avenue was sheathed in fabricated cement slabs by architect Augusto Camacho in a style meant to evoke the “Maharlika” style of Marcos Administration public buildings. The original entrance was replaced by an adobe ground floor and a timber gabled-doorway that suggested the traditional Maranao panolong.

The latter features still exist, but the cement panels were removed in the 1990s, exposing the remains of Carerre & Hasting’s formidable design as well as an additional story imposed above by Camacho.

The Philippines government has declined to consider a full restoration of the original building, which lingers on in this curious half-life.

Looking thoroughly cowed by its neighbors, 554 Fifth Avenue, here shown to the left of 556 Fifth Avenue, is a pleasant studio building of no great distinction.