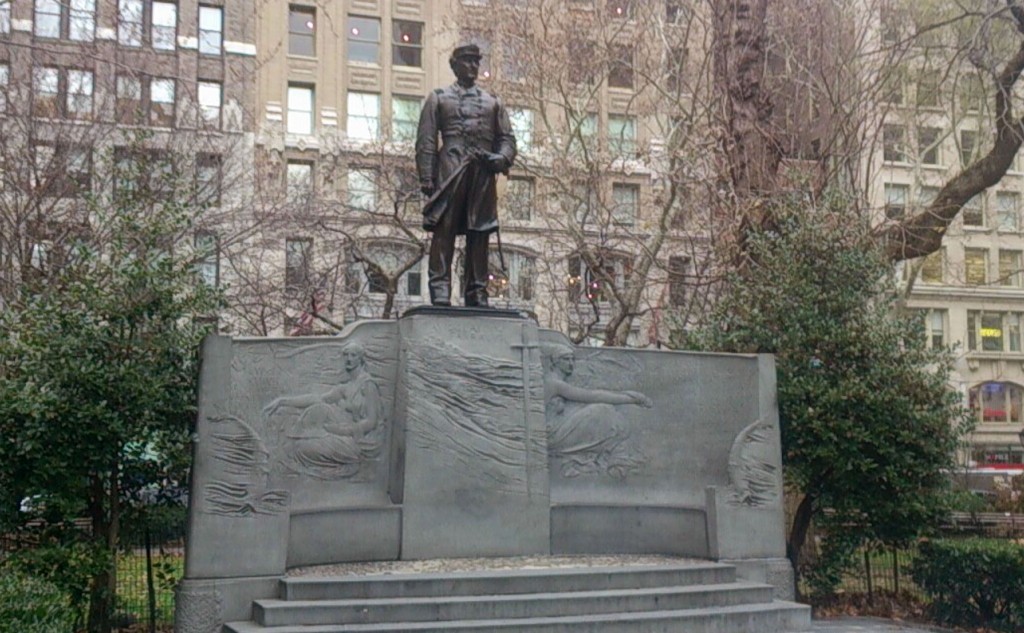 First plotted in 1811, Madison Square Park is a much-reduced design of what was intended as a “Grand Parade” that would have extended from 23rd to 34th Streets and from Third to Seventh Avenues – an area larger than the entire present NoMad district.  Named after the then-in-office President James Madison, the park was originally a military training ground.  It was opened to the public in 1836 having acquired formal landscaping and an elegant cast iron fence.

By the 1860s Madison Square Park was the elite center of New York society, who lived in dignified brownstone houses surrounding the park. These upper-class families were able to prevent the construction of a new City Hall in the park, but not its requisition for military training during the American Civil War.  After several years of rough use both during and after the conflict, William Grant and Ignatz Pilatz (the latter the chief gardener for Central Park) created a design to renovate Madison Square Park beginning in 1870.  In subsequent decades numerous statues were commissioned including the beautiful Farragut Memorial (1880), a masterwork of sculptor Augustus Saint-Gaudens (pictured above) and distinguished buildings rose on all sides, including the Flatiron Building and the now-demolished original Madison Square Gardens.

Restored in the 1980s and 1990s, Madison Square Park is today one of the most beautiful of New York’s small parks, an oasis of green surrounded by some of the city’s best architecture.  Views of the Flatiron Building and the Metropolitan Life Tower are augmented by a highly successful public sculpture program of temporary installations by various artists – although what may have been the most arresting such display in the park’s history took place from 1878 through 1883, when the torch-bearing hand of the Statue of Liberty was erected in the park to drive fund-raising for the monument’s completion in New York Harbor.