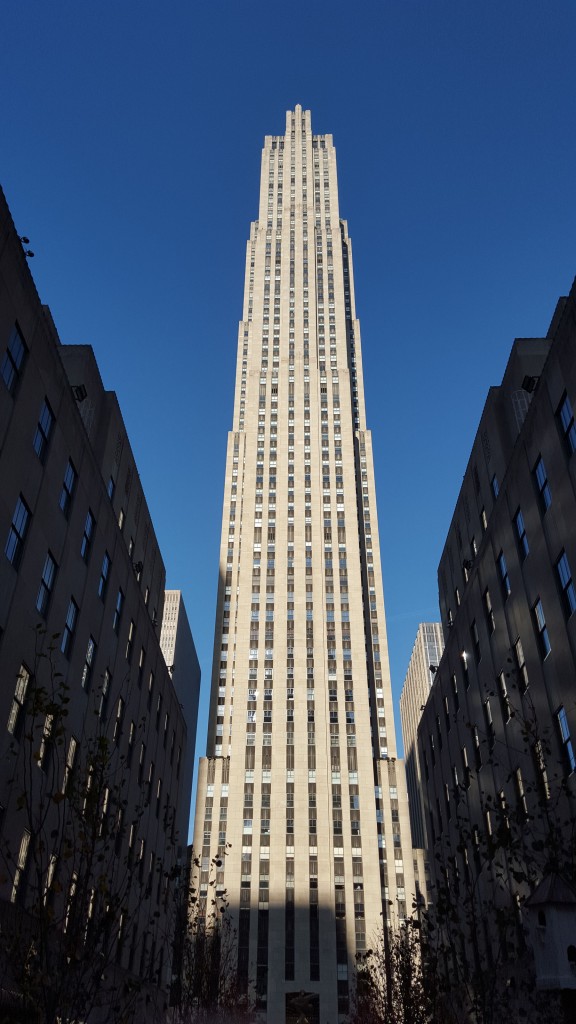 30 Rockefeller Plaza, also known as 30 Rock, The GE Building and more recently the Comcast Building, is the largest building in Rockefeller Center and one of the greatest Art Deco structures in the world.  As of this writing still the 14th tallest building in New York City at 850 ft and 70 stories, it is the true architectural fulcrum of Midtown and the masterwork of Raymond Hood, whose other works in New York include the Radiator Building overlooking Bryant Park and the Daily News Building on East 42nd Street.  Its decorative program includes a vast frieze over the entrance by Lee Lawrie depicting “Wisdom”; its forecourt is the location of the famous Christmas Tree at Rockefeller Center every December.

The building’s observation platform, dubbed “Top of the Rock”, provides visitors with one of the best panoramic views of the city’s skyline to be found anywhere.  Directly beneath the platform is the famous Rainbow Room, itself a New York City Interior landmark famed for its rotating dance floor.

Once the offices of the Rockefeller Family, 30 Rockefeller Plaza’s most famous tenant is the television network NBC, which was satirized by the popular Tina Fey comedy 30 Rock.

Add a zero to the address – and you have the number of posts on Every Building at Fifth thus far! We hope you’re enjoying the tour…