Faces on Fifth: Kevin W. Burns at the Forbes Galleries 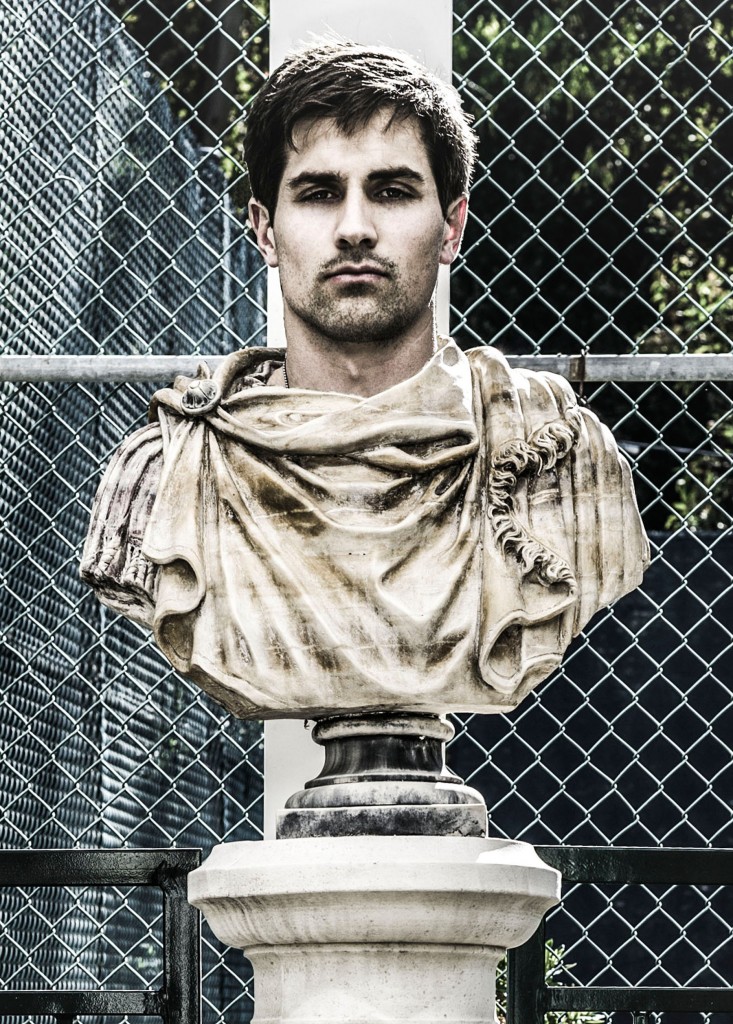 Currently on display at the stately Forbes Galleries, artist and engineer Kevin W. Burns’ show Fool of Myself is a sly and snappy surprise. A series of color and black-and-white photographs, the folio (Or, as Burns terms it, Foolio) is a satiric yet jaunty look at the idea of creator-as-genius.

Currently a mechanical engineering student at Rutgers University, Burns has a decade of experience with the Department of Defense and Army Corp of Engineers and degrees that include a Masters of Public Science and Policy at Columbia University. His art, in contrast, seems a wry holiday from sober-sided aptitude. “I wanted to use something technical to create its antitheses,” Burns says. “I wanted to play with the idea of the frankly impossible.”

The results are a series of subtly self-mocking self-portraits that incorporate bizarre camera angles and dramatic juxtapositions that tilt the viewer into a world where the Classical trope of mimetic irony becomes something like mimetic sarcasm. Thus Busted (detail above) portrays the artist as a slightly nonplussed and stubbly Roman statue while Jerk in the Mirror shows a man engaged in an unexpected tug-of-war with his own reflection.

Burns is careful to achieve the maximum effect through on-site trickery rather than through post-production: “I focus primarily on photo surrealism,” he says. “And I do use Photoshop, but as little as possible. If a chair looks as if it’s floating in air, it’s because that’s how it looked through the camera lens.”

Christopher Forbes, Vice Chairman of Forbes Media LLC and the Founding Curator of Forbes Galleries, believes that the show’s humor is a key element. “It’s not often technical proficiency is joined with self-depreciation,” Forbes says. “People respond well to something well-done that doesn’t applaud itself.”

“The Forbes Galleries have displayed artwork ranging from the serious painters like Melchart to humorous cartoonists like Richard Searle,” Burns says. “I fall closer to Searle on that spectrum.” No mean feat, either.

Fool of Myself is on view at the Forbes Galleries through November 14th, 2014; contact the gallery at 212-206-5548 for further information. The series can also be viewed on Burns’ website.