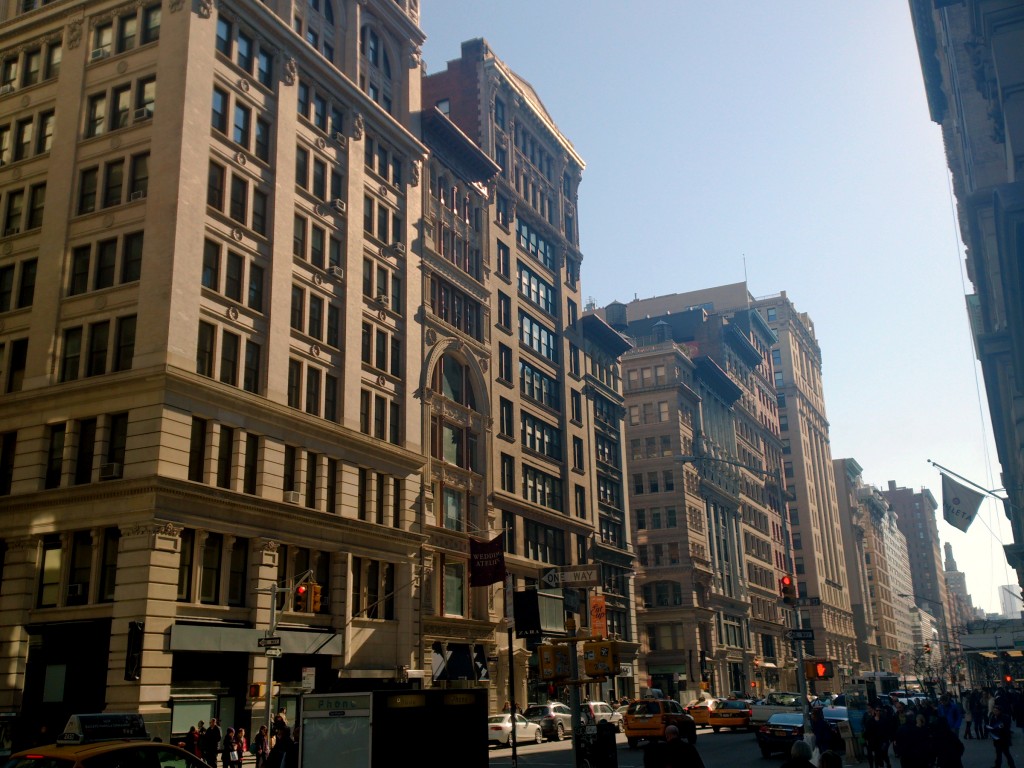 From 14th Street through 23rd Street and including the west side of the 24th Street block, Fifth Avenue passes through the Ladies’ Mile Historic District, so named for the historic department stores that dominate the area from Broadway to Sixth Avenue.

Once the premiere shopping area for the well to do, these buildings have recently been reinvented as boutiques, design showrooms and office space for small companies, particularly design galleries and tech businesses.  The popularity of the area with the latter has given rise to a new nickname, “Silicon Alley,” and would appear to prove that historic preservation does not impede an area’s desirability or commercial growth.

The dynamic and inventive atmosphere of the Ladies’ Mile today is matched by the historic architecture, which represented the latest trends in solutions for the high-rise building as practiced in New York from the 1880s through the 1910s.  Incorporating large windows and high-ceilinged spaces, these building echoed the “Chicago School” of skyscraper design in their column-like division of the structure into base, shaft and capital, but used Classical forms of ornament derived from the French-inspired Beaux Arts movement in place of Chicago’s abstract, nature-based forms.  The result was a new form of architecture distinctive to New York and along with the Chicago School, symbolic of new American cultural and technological forms.

The firm of Robert Maynicke, a little-known pioneer of loft construction, designed many of the district’s buildings.  Other architects included Louis Korn, John B. Snook & Sons, McKim, Mead & White and Daniel H. Burnham, whose magnificent Flatiron Building of 1902 soars over the intersection of Broadway and Fifth like the prow of an arriving ocean liner.  The result is one of the most intact and possibly the best collection of commercial architecture on Fifth Avenue if not in the entire city.