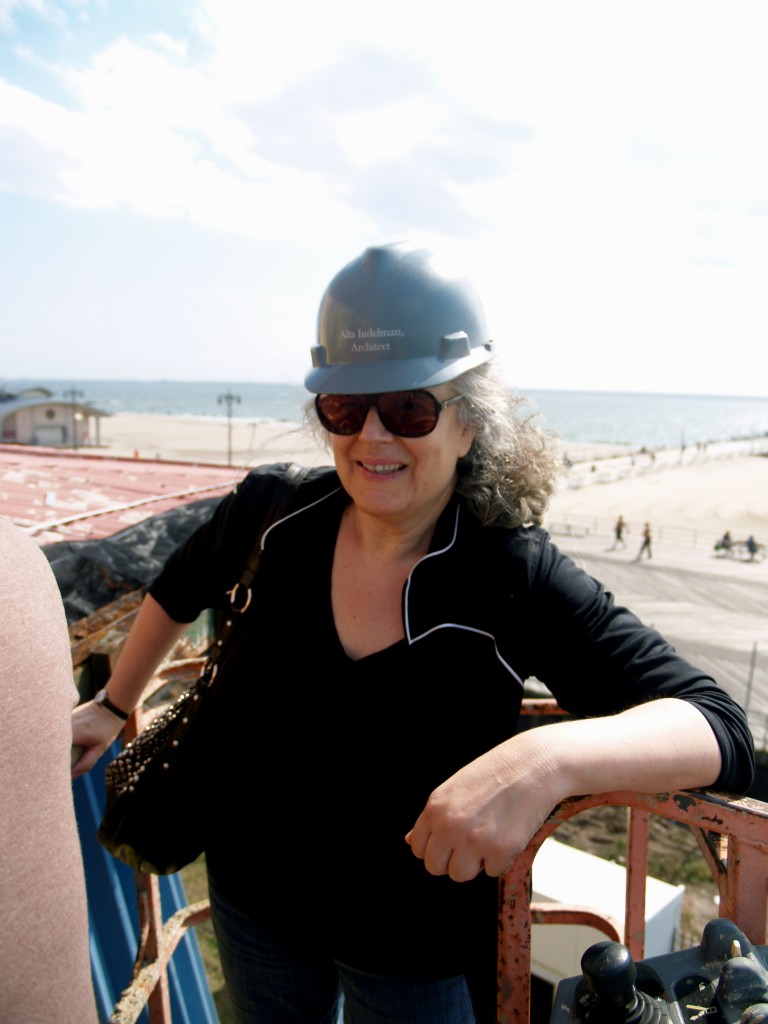 In this installation of Faces on Fifth, our series of profiles of the people behind Fifth Avenue’s businesses, institutions and buildings, we speak to architect Alta Indelman.

As the architect of 61 Fifth Avenue, the first new residential building on Fifth Avenue south of 14th Street since 1955, Indelman may be the first woman to design a new building on the Avenue; her career has ranged from new construction to renovated interiors to the restoration of Coney Island’s beloved parachute jump.  Pictured studying the Coney Island landmark from a cherry-picker, Ms. Indelman spoke to us about her work at 61 Fifth.

Approached by the developer, Indelman knew from the beginning that the site posed a unique challenge as well as an opportunity. “I was given the program for a condo with retail and knew from the start that we had to be respectful of the surrounding architecture,” Indelman said, noting that her past experience has included work with the celebrated preservationist Margot Gayle and that her current affiliations include membership in New York’s Victorian Society.

“We had to replace the fire-damaged Schrafft’s Building, which was beyond structural incorporation into the project,” Indelman says. “But the new design echoes its high windows and classical proportions.”  References to other nearby buildings include 61 Fifth’s pre-patinated copper penthouse, which suggests a contemporary take on the grand copper mansard at 43 Fifth Avenue. “I liked the concept of breaking up the height,” Indelman notes. “I wanted to articulate the top.”  Vast framing surrounds for the double-height windows were inspired by similar treatments created by the great Chicago architect Louis Sullivan, whom Indelman calls “a master of the gentle approach to the rectilinear grid.” Other classic materials include Indiana buff limestone and Deer Isle granite, both domestic stones that have been used up and down Fifth Avenue for over a hundred years.

Future projects include a cutting-edge industrial building in Queens that will feature a green roof; for now, Indelman is glad to have fulfilled the brief necessary for such a distinguished site and to have created a design that sits easily among its dignified neighbors. “The Forbes Building opposite is a gem,” she says. “The whole location is fabulous.  I’m thrilled to have made an addition to this streetscape.”

One response to “Faces on Fifth: Architect Alta Indelman”