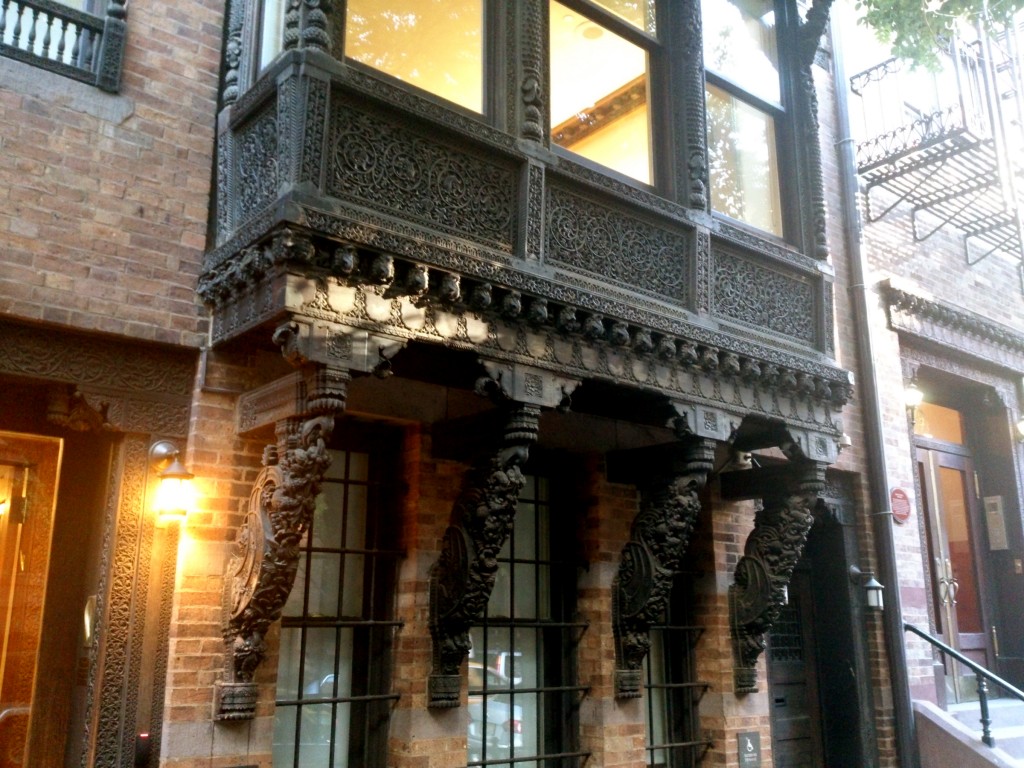 One of the great treasures of Greenwich Village, the beautiful Lockwood de Forest House is a unique landmark of the Aesthetic Movement in American architecture. Located at 7 East 10th Street, just off Fifth Avenue, the house is now New York University’s Edgar M. Bronfman Center for Jewish Student Life.  Once called “the most Indian house in America” by House Beautiful, relatively little of the original interiors at 7 East 10th Street have survived: fortunately, the exterior is nearly perfectly preserved.

Heir to a New York family’s shipping fortune, Lockwood de Forest had a keen interest in design.  Having studied under the painter Frederic Church, de Forest joined Louis Comfort Tiffany in founding the company known as Associated Artists.  The company was extant only from 1879 to 1883, but was a major leader in the American Arts & Crafts and Art Nouveau movements, with historian Christopher Gray calling it “one of the most influential decorating companies of the 19th century.”

During his time with Associated Artists, de Forest traveled to India and established a factory in Ahmedabad where Indian export furniture was created for the American market.  In 1887, de Forest worked with architect Van Campen Taylor to create a unique townhouse for himself that was among the first in New York to include a street-level entrance and the only one to incorporate carved work in teak – doorway surrounds, windows, the cornice and a spectacular oriel window (pictured) that features traditional Indian imagery from elephants to crescent moons.  Artisans at the Ahmedabad factory created the architectural details, which are as arresting today as they were when first installed over 125 years ago.

The Bronfman Center is home to numerous student groups and projects, with a focus on social justice work, disaster aid and international relations between Jewish and other communities.  Its Shabbat dinner is the largest such event in New York.